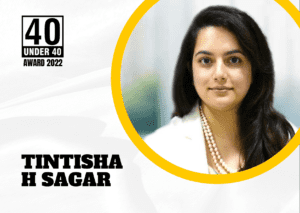 How to make using a breast pump (aka breast pumping) less dehumanizing and more accessible?

Some entrepreneurs begin with the intention to join business and follow that up with the question of what service or product they would want to put out to the market. For Tintisha Sagar, the process was inverted. She had already established herself as a corporate professional when she was inspired to make breast pumping for mothers a simpler, less painful, and portable process.

Ms. Sagar conceptualized the idea for théa while sitting in a dark feeding room, wanting to be anywhere but there. She had entered the professional world in her early twenties, blissfully unaware of the changes life had in store for her. When she became a mother, she realized that being able to “do it all” was easier said than done. Despite living in a “tech driven” world, there were very few products that helped relieve a mother from the constant demands of caring for a newborn baby, to allow her to focus on anything else.

Even the breast pump, which was supposed to help new mothers have a more flexible breastfeeding journey was a constrictive technological contraption that required its user to utilise it in a restricted feeding area. The pre-existing cultural resistance to the idea of breastfeeding was compounded by technology limitations and turned into a social barrier for women, especially those that wanted to resume their pre-baby routine as soon as possible.

In response to this glaring gap in the market, Tintisha made the decision to introduce a more utilitarian product that would enable women to pump hands free, anytime, anywhere. In doing so, she created the théa wearable breast pump – a completely concealed breast pump that lets the user pump wirelessly anywhere, anytime on the go, without confining them to feeding rooms, or having to remove their clothes – making the entire process of using a breast pump more dignified.

An Ivy League graduate from Columbia University with an MBA and a BSc in Finance, Tintisha has spent most of her life making decisions in board rooms across the world. She is the current executive director of Sagar Chandramma Hospitals, which are focused on gynaecology, maternity, and paediatric care. Additionally, she serves on the council of the Dr.Chandramma Dayananda Sagar Institute for Medical Education & Research (CDSIMER).

So when the grand idea of making life easier for new moms came to her, she was armed with knowledge from her own personal experience and the opinions of experts at hospitals and research centres, to create a product that would make breast pumping more convenient & accessible to women.

It was also a cultural change being implemented, as the idea of breast pumping for new mothers was a strangely muted topic, with very little awareness around it. The first step for Tintisha was then to make technology a part of a new mom’s everyday routine.

The sociocultural debilitation of the idea of motherhood and what it takes to be a good mother, is somewhat flawed and can be significantly reduced if there can be a more open dialogue about the true needs of a new mother, not just what can be accepted ‘socially’ because of ‘tradition’.  The challenge then becomes addressing and navigating this subject convincingly.

So Tintisha deserves an enormous amount of praise for taking the baton and performing the task with elan. She was not only able to spread awareness about the benefits of adopting technology in the journey of motherhood, progressing the case for a more gender inclusive approach to technology, but also successfully prepared a fertile ground for launching her improved version of an antiquated product.

Théa’s most effective impact has been the awareness it has been able to raise. The sales the products has made are off the back of that campaign’s success. Before Ms.Tintisha’s intervention, the breast pump was seen as a specialist product with mothers who had some underlying problem. The fact that it could be used beyond a pathological situation, to simply make a mother’s life easier, was quite a radical idea.

Additionally, the théa pump was a significantly better and more discreet alternative to the traditional pumps, allowing it to be used in public, while engaged in other work. For Tintisha, this meant the freedom to return to work while continuing to breast feed & breast pump beyond the six-month mark, and not be held back by social taboos. Many women related to this sentiment, and their raving testimonials endorse the brand warmly on their website, www.lovethea.com.

Tintisha envisions a bright future for théa, where the product will be used by every new mother in India, taking the autonomy of their bodies back from underneath the cultural microscope. In her own words, The breast feeding journey is an important one and as a country we must condone freedom for women’s right to breastfeed anytime, anywhere – without it being a taboo. Let’s bring breastfeeding out of the dark ages!

Her long term goal is to introduce this product and its philosophy beyond India’s border, into Africa, South East Asia, Middle East, etc, which remain untapped markets for such a discrete product. Her enthusiasm for the issue bodes well for the realization of her dreams.