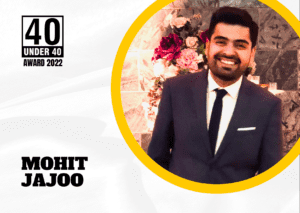 How to expand the family real estate business?

Like many youngsters born into business families, Mohit Jajoo had the privilege of learning the ropes first hand from an early age. The son of J.K. Jajoo, he was heir to the illustrious Shubhashish Group, one of the most prestigious organizations of Rajasthan. Established in 1983, over the 4 decades of its existence, it had extended its services beyond real estate to include wealth management, logistics, packaging and warehousing, and IT services. Based out of Jaipur, the founder of the Shubhashish Group has also delved into philanthropic activities, as many businesspeople are wont to do, with a special focus on education.

Mohit pursued a degree in architecture from the Malviya National Institute of Jaipur, and followed it up with a degree in business and economics from the University of Oxford. From the trajectory of his education, it is quite clear that he had mapped out his path as part of the Group with great foresight and detail. And it proved beneficial, as the youthful zeal and age appropriate ambition that he brought into the business gave it a significant performance boost.

Mohit had started working with, and for, the company since the age of 19. So the foundations of his career as part of its legacy had been set from the very beginning of his adult life. But he officially joined the employee line up only after finishing his education. He started as the Executive Assistant (EA) to the Chairman, J.K. Jajoo, in which position he spent some 3 years, learning the ropes of the professional world in greater and practical detail. It was only after he had proved his mettle there that he was allowed to become a part of the board as Executive Director and CEO of the company.

Mohit’s preparation for his position was extensive. His aim was not simply to sell properties, but involve himself with the processes of construction, sales and maintenance, all of which was covered by the company. He knew that his job was not simply to deal in the inanimate objects of land and structures built on them, but the business of selling homes that would be lived in by real people. He also spent better of three years studying market trends and patterns in real estate across the world before he considered himself knowledgeable enough to take on the role of a leader in his field.

Under his leadership, the affordable housing project Shubhashish Geeta (Phase 1) was launched in the January of 2020, right on the cusp of the world shutting down under the weight of the pandemic. It had been a period of mass confusion and fear, with a shortage of both labour and funds.

It was thus an ode to Mohit’s competence as a leader and manager that the group was able to deliver the finished units ten month before the specified date, by August 2020.

The Shubhashish Group has already launched multiple future projects under the supervision of Mohit Jajoo, which include the expansion of the Geeta project into phases 2 and 3. He has also taken up the reins of Jagriti, a philanthrophic endeavour launched by his father with an intention to fight illiteracy in the country.

Mohit is a firm believer in the transformative power of education and is keen on using this platform to establish and curate institutes that serve the needs of the disenfranchised, allowing them to find socio economic prosperity.

As a businessperson, he is aiming to double the rate of growth every year, which he calculates will lead them to becoming a 4000 crore rupees company by the 2029-30 financial year. His projected delivery of finished homes is over 10000, across at least 10 Indian states and multiple countries, with a 10000 person team working under their banner.

His vision and dreams are ambitious, to say the least, but Mohit has more than proved his capabilities over the years. His work has been recognized across through awards like Times 40 Under 40 2022, Most Influential Young Leader Award by Asia One in August 2022, Young Achievers’ Award 2021, and Best Emerging Entrepreneur Award of 2022 in Real Estate. Shubhashish Geeta was recognized as the Smart Project of the Year (North), awarded by the 13th Annual Estate Awards.

Mohit Jajoo is among a host of emerging entrepreneurs who are bringing a renewed energy into the business space of this country. It remains to be seen if their individual optimism and success has the impact they hope to achieve.