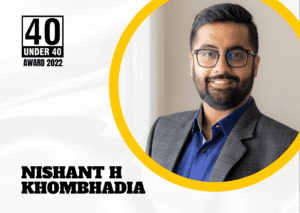 How to venture out, individually, into the world of interior design?

Nishant Harish Khombhadia had been working for an architecture firm in 2014 when he had to design five different interior sectors in different genres. This successive stream of work convinced him that he could do it as a business by himself.

He quit his work and began booking freelance work by the September of that year, and was quickly swept in the flow of work. He continued working as an individual designer for a little under four years before he launched his own brand called NV Interior Design Studio in July of 2018.

Nishant has currently spent a cumulative of 8 years as the Director of his own company. And he had gathered experience in various institutes as an employee. Over his twenties he learnt to accept his failures, but keep momentum up, which was perhaps the reason he had been brave enough to leave a well paying job behind and begin his own venture.

From a Small Office Set Up

When he set out on his own, he utilised an empty office space that his father had, to base his service out of. This was certainly a privilege to have, given the property prices and rent rates. But it was still a big gamble, leaving an employment with a prestigious firm, with its fixed source of income.

What Nishant was serving to the world was his skill and experience in a comprehensive personal package. As an entrepreneur his job was to sell himself as a person with vision. NV Interior Design Studio bolstered his skill with a structural backing of consultancy and contractual terminology, that is invaluable in the smooth functioning of a business.

As a designer he is driven by the desire to create something new, in collaboration with his clients. Like the business people, he has a personal attachment to his skill set and clientele, but offsets it with a keen sense of professionalism.

Over the years Nishant has gathered a dedicated team of people who are equally at adept at their jobs, and leads them by example in the world.

Nishant identifies the time of lockdown during the pandemic as a strange period of simultaneous difficulty and peace. He was concerned by the lack of work and earning, but was also relieved by the chance to spend time with his family. His personal investment in his client’s work kept him busy for the majority of his time, and the fallow land of the pandemic allowed him leisure to catch up on his personal life.

Over his contemplative moments then, he reflected on his journey and was perhaps surprised by the time having passed. He liked to observe the client’s expression of wonder and joy at seeing their dream interiors realized, and remembered almost all of them separately. Life hadn’t gotten easier for him, but he had enjoyed the experiences he had gathered along the way. He had learnt to embrace the difficulties of life.

The pandemic especially taught him to save for the future, seeing that despite being one of the most successful interior design firms in the country, the lack of work had been a strain on its collective fund and function. And he advises the youth of today to invest and save extensively, considering the continued economic instability the world is facing.

The impact he wants to have on the world is both an artistic and business feat, to produce continually better designs that meets, and even exceeds the client’s expectations. He is driven more by the work itself, than the profit ingrained in it. But having consistent good work goes some way in ensuring client happiness and references.

Nishant leaves the country the same piece of knowledge he shares with his colleagues and friends. A need to stay grounded and be empathetic. That is what allows him to be good at his work, and he considers it essential in the quality of any human profession.

With the success and experience he has achieved, we are inclined to agree.