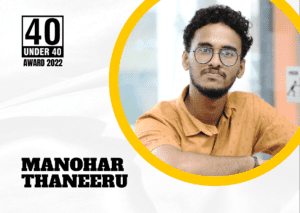 How to turn the tables of your fate?

We have all had our days wondering about this. All our fates seem intent on keeping us down. Or that is what we feel, when times are bad.

But for Manohar Thaneeru, fate did have an especially difficult journey planned. After losing their father at a very young age, he and his brother were brought up under the care of their mother. She provided for their small family by working continuously, and funded their education as best she could.

As is common, she faced a cavalcade of criticism from relatives and family members, who wanted her to suspend her children’s education and make them join the labour force. But she was adamant in her vision and belief.

Once Manohar finished school, he decided to join a B. Tech course in TKR Engineering College. Funds were short at home, and he decided that it was time to join the work force.

His initial work was in the informal sector, as a part time paper vendor.

It was the dawn of digital media, and Manohar decided that it was a skill worth developing. An astute and dedicated learner, he quickly mastered the fundamentals of digital trading and marketing, which supplemented his income well during the college days.

Manohar likes to call himself a B. Tech by mistake. Because although it was the course he chose to pursue, it is not the one that has been the source of his success henceforth.

As his college education came to an end, the time to land a job and enter the professional life was before him. A series of companies stood at the college’s doorstep, looking for efficient workers to join their fray.

A free willed and intelligent individual, Manohar quickly figured out that joining a corporate office meant making a robot out of oneself, surrendering every ounce of passion for life. And he wasn’t about to do that.

Seeing that landing a job was just as difficult as starting his own business, he decided to choose the latter as a professional path.

Manohar started work without expecting much money, simply trying to do his best for his clients. He developed his skills by completing workshops with ISRO (Indian Space Research Organization) and IIT Hyderabad. And eventually, his hard work paid off.

Manohar has experienced heartbreak and depression, as well as financial instability. So his pride on his current professional success is well warranted.

He wears many hats in his institution, being the founder, trader, and a coach to willing students. As a teacher he has trained over 200 students across the country, many of whom have joined Manobhavs Media as workers. As a digital marketing firm it has engaged in business with various industries, including foreign exchange trading, which is one of Manohar’s personal fortes. He has an extensive list of more than 140 clients which include India’s Premium brands and all.

Today he is able to command a six figure return from his business, which is a testament to his perseverance and skill. And although he is able to relax a little now, he is not one to rest on his laurels.

His journey so far has been rough and bitter sweet. While his reminisces often lead him to dwell on the betrayal of close friends, he is glad that he has been able to build something despite all the setbacks in his life.

As he likes to say, Learn all things, both good and bad. Knowing the bad will help when such a situation inevitably arrives.