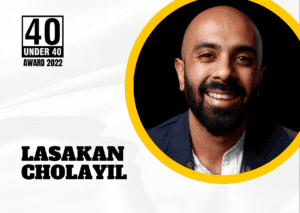 How to corner the premium Ayurvedic skin care market?

The category of Ayurvedic skin care itself was created under the supervision of Lasakan Cholayil’s grandparents. His grandfather DR V.P. Sidhan was a doctor with the Indian railways who founded Medimix. The original green bar of soap had been made with railway workers in mind. The doctor and his wife began making the first bars in their kitchen, which were priced reasonably to be availed by the practitioner’s mostly working class patient base.

Lasakan had joined the family business in 2016, immediately after graduating from Lynn University with a Bachelor’s degree in Liberal Arts. And he remained with it for a while, before he decided that it was time for him to venture out.

He had studied business as a skill, and had developed it further in service at the family business, so he was confident in his decision, and he decided to expand on the family’s legacy of Ayurvedic skin care.

Over his tenure at Cholayil Pvt. Ltd., he had noticed that there was a market for luxury or premium Ayurvedic skin care products, which Medimix was not a part of. DR Sidhan had made the soap with the working class people in mind, and it was packaged and marketed accordingly.

Lasakan decided that he would fill this gap with his own venture Sadhev, which he launched in 2019.

The Seed of the Idea

It began germinating upon a visit to Kerala on Lasakan’s part, to pay respects to his forefather Cholayil Kunju Mami Vaidyar. While there he delved into the Vaidyar-Cholayil clan’s inherited history of medicinal practices and recipes, which even his grandfather had drawn on. He found that there was a veritable treasure trope of techniques and recipes in there that could benefit the world in myriad ways. And he felt the best way to go about doing so would be to offer them as products through his own business.

His vision was to re-imagine, re-define, re-bottle the familial Ayurvedic wisdom, and to revolutionise holistic well being.

Venturing out on his own with the family legacy meant that there was a weight of expectations on his shoulder. So he allowed a long time for research and curation of methods and materials, and a further period on trials, before Sadhev was launched to the masses. It was in September of 2019.

Like many other businesses that were grievously affected by it, the onset of the Covid pandemic of 2020 was a cause for concern for the newly minted brand. But Lasakan perrsevered, having enormous faith in his endeavour, and Sadhev floated through the troubles, into success.

The brand had begun with only a select few products, and he waited till the first respite happened, before returning with the further waves. Lasakan used that window to launch the wider range, which included Sadhev Ayurvedic Shampoo, Sadhev Coconut Shower Oil, Sadhev Herbal Lip Gel and many more on the company’s official website. It was the era of surging e commerce, and Sadhev’s products quickly gained popularity among consumers.

Sadhev has shown a consistent, 2x year on year growth since its inception, along with a 40% customer retention rate, which are both remarkable achievements. Lasakan’s intense research and trial period has proved fruitful, as many customers have shared stories of Sadhev products having miraculous effects on long suffering skin conditions. The brand has a 96% customer satisfaction, implying a devoted dedication on their part to ensure a quality product.

An environmentally conscious individual, Lasakan has also begun an endeavour to plant one tree with every single unit sold, and estimates to have caused a 500 tonne reduction in the atmospheric CO2 levels.

Over the future, Lasakan has envisaged Sadhev’s expansion into an omni channel model with at least 24 physical stores across the country of India, as well as international outlets in the Middle East, United States of America, South East Asia, and select pockets of Europe. They will help him achieve the goal of reaching a 100 crore rupees turnover rate in the coming 7 years.

To aspiring entrepreneurs, he advises calculated risks. His own business had been a risky endeavour, as he branched out on his own, away from the security of the family umbrella. But he also advises them to engage with, and pursue, things that they are passionate about, as he did with Ayurvedic skin care. While this doesn’t guarantee success, through his dedication and hard work Lasakan has proved that it does significantly improve the chances.

Share
Facebook
Twitter
Pinterest
WhatsApp
Linkedin
Email
Telegram
Previous article
40 Under 40: Sargam Dhawan Bhayana has the Beauty Industry in the palm of her hand with Innovative and Empathic Business Practices at Tressmart
Next article
Suresh Ganesh Patel is the New Kid on the Fashion Block