Entrepreneurs Today
Home40Under40Business is in Manish Kumar's DNA
40Under40

Business is in Manish Kumar’s DNA 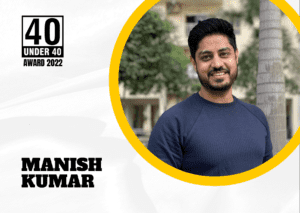 How to transition from a salaried job to a successful business?

If Manish Kumar is to be believed, then it is to be done on an impulse, knowing that there would be no time like the present, and with a steady mind and sincere belief in one’s abilities.

But then again, not all of us are made of the same stuff as Manish.

Born and raised by a middle class family in Delhi,  his father dabbled in a variety of businesses across his professional life. So Manish had grown up learning the ins and outs of business management.

Although he was always sure that he wanted to start his own business, he joined the workforce as a salaried employee. Having followed his passion for mathematics into education, he quickly landed a well paying data analytics job for a respectable corporate firm. But the passion for business never left him.

When he finally decided to take the leap, the pandemic struck, slowing the economy down to a standstill. But Manish was not one to be deterred.

Because business runs in the family for Manish, DNA features prominently in his nomenclature of brands. InsightsDNA was his first business venture and it capitalised on his expertise of data analysis.

The first few months, clients were few and far in between. The situation was exacerbated by Manish being the father of a 6 to 7 months old baby whose needs put a lot of financial strain on the family. But, as I already said, Manish is made of sterner stuff than the rest of us.

His goodwill in the industry meant the clients slowly flocked to him, and stayed loyal due to the quality of his service.

Initially he had no plans to diversify into the content creation sector. After InsightsDNA took off, he launched ManishDNA as a brand to explore his love for public speaking. Through it he wanted to create awareness about freelancing, online businesses, and analytics among the masses.

The first video he produced was titled How to Start a Business in 30 Days, where he shared his experience of starting his own endeavour. In a short while the video hit 75k views on LinkedIn, and Manish realised that this was as much a viable business as data analytics.

Over the two years of being an entrepreneur, Manish has become a well known name in business circles. He has written an ebook called 30 Days to Startup to help aspiring entrepreneurs embark on their journeys. He has won several CEO of the Year Awards recognising his efforts, and has been featured among 200 selected LinkedIn creators for their Creator Accelerator Program of 2022.

Manish has also been invited to speak at webinars at Amity University, IILM Noida, Delhi University, as well as talk shows like Shrishiksha and Innoventure. He enjoys interacting with ambitious individuals who are looking to start their own businesses. As someone who went through some tough times to find a footing as an entrepreneur, his advice is quite invaluable.

In his lectures, and videos, Manish goes into the nitty gritties of running a business, and how to work on attracting clients and network better. But the primary advice he gives is to be patient and consistent in vision and effort. Success is bound to follow.