Entrepreneurs Today
Home40Under40Aryaman Mishra Dreams of Creating the Largest Chain of Retail Shops Through...
40Under40 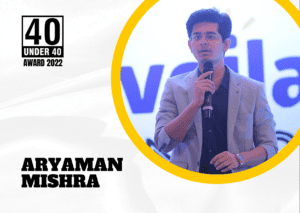 How to engage the huge retail sector in a single string?

Aryaman Mishra was born to a middle-class home in Bokaro Steel City. From the very beginning he had dreams of starting his own entrepreneurial venture, but being from a middle-class family, it was a dangerous dream to have, as it did not align with the dreams that are harboured there. But he was adamant about his vision, and knew that not only would he do something independently, but he would also help change society on the way. As he finished school, he found a great chance to attempt his shot at convincing his families, reasoning that it would be the first step to convincing the world of his ability. Most of his friends were taking a break to prepare for admissions to academic institutes, and Aryaman used that gap of a single year to venture out on his own. Having secured an entry into International School of Business and Finance in Delhi, he set off for the city, but stopped in every station in between Bokaro and Delhi NCR to gather first-hand experience with retail shop owners and manufacturers, immersing himself in the cultural landscape of each place. He called this his Bharat Darshan. Over the duration of this darshan he realised that despite being a huge part of the Indian economy, the retail sector was severely unorganized. So, he decided that he would try and do something about that. Thus, the One24 Store was born.

Aryaman gathered a team of like-minded individuals who believed in his venture, and began crafting a working plan for the launch of the business. They knew they wanted to work in the retail sector, and begin with the most basic of grocery goods, but wanted to keep the possibility open for further diversification in the future. After deliberating on the validity of their decision to begin business for a total of 124 days, Aryaman took the number and turned it into the name of their initiative. It would be a reminder of the conviction and time they had put into the effort, as well as keep the nature of the work ambiguous enough to allow further, multidirectional expansion. The initial product of One24 was an operating system which would help streamline stock taking and customer management for the retailers. But while working with their first client, a shop keeper in Bokaro, the team was made privy to the different aspects of the retail experience that needed assistance. Aryaman realised that the One24 Operating System, while robust and quite ahead of its time, was not enough, and a more involved approach was necessary. So One24 became a comprehensive initiative which would overhaul the retail experience by giving the franchised stores a unified theme, standardising the experience. The proprietary software would help automate major calculations regarding stock and customer management, while the owners would be empowered with couponing system, and a horizontal online integration that would help customers identify the nearest One24 store and order products through an app. Maintaining his philanthropic ideals, Aryaman kept the costs to a minimum with an investment of under a lack required from the shop owners. The product was ready for launch in 2020, but the COVID pandemic delayed it. Initially it had been a disheartening news for them, not knowing what would happen, but the team took it in stride and used the time to gear up for the venture they were putting out into the world. Aryaman had chosen to forego experience in favour of commitment when it came to employees, and he used the time to hone their skills even further, and look at the entire enterprise from a bird’s eye view, to identify any lacunae. When the company finally launched in August of that year, the team was primed to work.

One24 Store has been one of the fastest growing start-ups of recent years. In the month of September, they set themselves the mission impossible of opening 12 stores across Gurgaon in 11 days, and accomplished it with flying colours. The people they had begun the venture with, who lacked much experience, are now seasoned professionals managing huge teams. It is still a small group of people, about 25 in strength, notwithstanding the contractual employees. But Aryaman trusts them implicitly through the growth and experience they have shared. The dreams of the One24 team are big. By November they hope to open at least 50 stores in the Delhi NCR region, and over the next 10 years, aim to connect lakhs of stores across the length and breadth of the country. For Aryaman, this is a dream of not just empowering the retail store owners, but the Indian economy itself. During his Bharat darshan, Aryaman had discovered that the Indian consumers were extremely open to new things. If the product or service was lax, they would leave it behind, but they were not averse to giving it a shot. It is this curiosity that he wants to harness to help India become a 5, and eventually, 20 trillion-dollar economy. He wants every individual to become an entrepreneur, no matter the scale of their ambition, and set up a secondary source of income to assure financial safety.

Maybe One24 will show us the way. That is Aryaman’s dream, anyway.