Entrepreneurs Today
Home30Under30 2023Shibili Rahman KP is Creating a New Financially Literate Generation Through his...
30Under30 2023 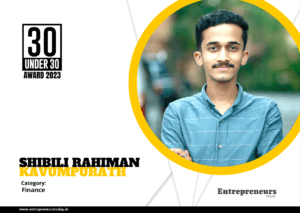 Shibili Rahman KP had a precocious interest in the stock market since his early teens. It culminated with him investing in shares as a novice, and losing a significant sum of money. To his credit, Shibili was determined to reimburse the loss himself, and managed to successfully accomplish that goal through years of hard work. It inadvertently taught him the intricacies of the stock market in detail, allowing him to traverse its treacherous expanse much better. Armed with this knowledge, he launched Royal Assets Investments as a training platform to help aspiring investors in their own journeys through the market.

When he was sixteen years old, Shibili Rahman KP wanted to earn some quick cash. A school child still, he was naive enough to think that he would be able to engage in the stock market and win big overnight. His overconfidence was soon crushed under the weight of loss he incurred over a very short period of time. Working from his father’s demat account, he accumulated a debt of 5 lakh rupees. He was mortified, and unsure of what to do. He couldn’t possibly inform his family or friends what he had done. So, the only path out for him was to try and recuperate the loss through his own secret hard work.

Learning the stock market’s movements while studying at school wasn’t an easy task by any means. But he was able to accommodate it into his routine. And through years of continuous effort, he managed to earn back what he had lost, and then some.

A Source of Income

At an age when pocket money counted as income for the majority of us, Shibili was earning money through stock trading. As this slowly became public knowledge, people began flocking to him for advice and guidance in dealing with the volatile and often hostile world of shares.

As currencies dropped in price, and prices surged, investment became a necessity instead of a luxury for the rich to expand their wealth. Without considered speculation, day to day earnings were simply not enough to spill over into any significant amount of savings. In such a situation, Shibili’s skills as a young veteran of the stock scene soared in demand. Friends and family members were eager to learn and adapt them, and he realised that training could also work as a viable business venture.

A child of the digital age, Shibili was acutely aware of the importance and benefits of effective branding. He knew that his skills needed to be effectively marketed to his target clients in order for them to be attracted to the service he was providing. So he set about doing just that.

Social media was a tool he used extensively. He expressed his love for the market, and made his story an anecdotal aspect of his brand. It was a narrative that not only gave an inspirational and dynamic insight into his history with the market, but also became a relatable point of entry for many aspiring young investors interested in the trade.

Thus, soon after establishing Royal Assets Trading it began generating buzz as a popular training hub for traders, and his charismatic presence became christened into the brand SR, which remained at the forefront of the institute’s identity.

A seemingly simple manoeuvre, this focus on his brand identity meant that in the long run he could leverage his own identity to expand his repertoire of services and activities.

Service and Aim of Operations

Through Royal Assets Trading, SR wants to spread financial literacy. As someone who earned first-hand experience of both the drawbacks and benefits of share market trading, he is eager to share his learnings with his curious and inquisitive clients. For him it is a way to spread awareness of a legitimate income source, as well as an arena where the knowledge of all the mentors and mentees may be shared and pooled to create a communal pedagogy of finance.

In an industry proliferated with scams and dubious investment avenues, SR’s service, targeted towards the education of common people about secure and intelligent finance management is quite priceless. But, being an efficient business person, he has been able to monetize it quite effectively.

Having emerged from the depth of extensive losses, SR has had the critical privilege of learning from mistakes, both his own and of others. It is with this constant eagerness to learn that he awaits the future. His current disposition as a business is markedly secure, valued over 1 cr rupees, with a huge community of traders and students. Barely 20 years old, SR has already seen an unsettling amount of success, both financial and social. But he has not allowed it to go to his head.

Over the next 7 seven years SR plans to expand his repertoire into the emerging fields of Crypto, AI and NFT, along with additional services in the digital marketing domain. He is also looking to execute more than 20 automated income sources. An inveterately ambitious individual, SR aims to attain a luxurious level of success that would be an inspiration to the world at large. And as that inspiring figure, the advice he imparts to the country is to dream big through the deployment of multiple income sources, to not be afraid to fail, and to seek out people who are willing to mentor you through the process.