Entrepreneurs Today
Home30Under30 2023Rohit Agarwal bridges the gap between creators and brands in the gaming...
30Under30 2023 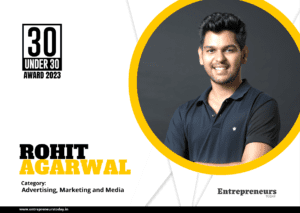 Over the past few years, the Indian video game sector has had phenomenal growth in sales and engagement. In India, the gaming market was valued at $2.2 billion in 2021. With India having the second largest gaming market in the world, the value is anticipated to grow by more than three times to reach $7 billion by 2026.

Market executives are sure that the Indian esports and video game scene will continue to reach new heights over the next five years despite the ecosystem still being in its infancy.

In an exclusive interview with Entrepreneurs Today, Rohit Agarwal, founder and director of Alpha Zegus, talks us through his journey in the gaming and marketing sector.

“A new generation advertising agency to redefine the game space”

They recently uncovered a significant gap: neither the brands nor the creators/gamers fully realize the potential of the Indian gaming market, even though it had high engagement rates and more engagement tools than any other entertainment sector.

Rohit reckons that this was primarily caused by a lack of information, communication, inadequate measuring instruments, and entry-level restrictions. As a result, the idea to incept Alpha Zegus happened to redefine the market by filling these voids for brands and creators.

When asked about his background, Rohit shares the irony behind him being a first-generation entrepreneur even though he belongs to a Marwari family. In the initial days of his college, since he explored and experimented in many fields, he gained a great deal of knowledge about industries like legal, finance, marketing, and sales. He accounts to have completed roughly 15 to 20 internships across a range of fields before determining his area of interest. Meanwhile, he had to travel a lot for work during those two years of experimentation, which allowed him to learn about various demographics. All of this resulted in him realizing the kind of potential each segment in India held, and how each segment behaves for him to cater to them.

It was in 2020 that when the pandemic struck Rohit decided to delve headfirst into the gaming industry.

“During covid people were essentially turning towards either content consumption, like everyone started watching more of YouTube more of Netflix or OTT whatsoever, or they started playing more.”

Brands around this time were also struggling concerning their sales. So, Rohit provided them with solutions since these brands still wished to stay relevant and have a market within the ecosystem.

“The marketing experts in the gaming industry”

“The specialisation that we bring in terms of gaming is that a brand can be assured that since we are so deeply connected and integrated into the whole space, there won’t be a better solution for them to step into the space.”

In the future, Rohit plans to expand operations to the APAC region and provide Web3, Blockchain, and Metaverse solutions to clients. Another thing they are working towards is to drive the creator economy by creating ROI-based, AI-driven influencer marketing tools. They also plan to expand their services to the lifestyle domain, once they build a strong foundation within gaming.

Rohit shares, “My initial investment into this business was just around one and a half lakh because I started the company by myself and in the first few month it was pretty much just me networking, executing, and doing everything with a couple of freelancers to help me out.” He adds that the company has pretty much been profitable since day one.

“I have been a part of many panel discussions, and it’s a nice feeling to be considered an expert within the space.”

While mentioning his achievements, he talks about the various media mentions and features in media houses like Forbes, CNBC, Moneycontrol, etc. The publishing houses would frequently get in touch with him to get his statements on what was going on within the space.

As per the achievements of the company, Alpha Zegus is the first in the gaming industry to have had the chance to collaborate with some of the significant non-endemic brands, many of which were first introduced to gaming in India by them. They have worked with non-endemic brands like KFC, Netflix, H&M, Adidas, and MuscleBalze. Other collaborations include Tinder, Netflix, Hotstar, Old Spice, Nickelodeon, Redbull, Upgrad, Unacademy, etc. Some endemic brands they have worked with are MSI, Intel, Logitech G, LOCO, Acer, Asus, and WD Black.

“The challenges we have been facing for the past six-eight months is that more people trying to venture into the space since this space is becoming increasingly popular.”

Rohit shares that some of the new ventures trying to break into the space are very heavily funded, which gives them a certain amount of leverage.

He admits that at the time, given there were certain attempts to destroy his company, things seemed a little daunting for an entrepreneur with a background as his with no mentor to turn to. However, he is appreciative of the stakeholders he has been working with for sticking with him and being quite candid about everything.

“I think that made me realize the most important lesson that just stay humble.”

The stakeholders’ cooperation and their enduring relationship is a result of remaining grounded and humble. Lastly, he highlights the significance of having the right people around you and the value of defining priorities for yourself, a lesson he learned the hard way in his twenties.