Entrepreneurs Today
Home30Under30 2023Preyash Saraogi talks about Saraogi Shellac Group and his strife to penetrate...
30Under30 2023 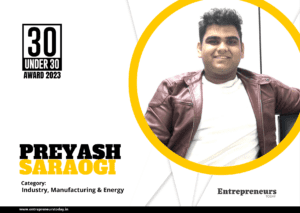 Saraogi Shellac is one of India’s top manufacturers and exporters of LAC and SHELLAC-based products.

After 29 years in operation, they have effectively transformed from a small organization with little market power to one with significant global influence. The team consists of highly skilled and knowledgeable professionals who ensure that the best raw materials are procured and transformed into outputs of the finest quality.

Continuing the legacy Preyash’s father build, in an exclusive interview with Entrepreneurs Today, he talks us through his journey at just the age of 21. A graduate of B.com from St. Xavier’s College, Kolkata, he is currently the Marketing Executive at Saraogi Shellac group and the Director of Saraogi Shellac Aromatics.

Preyash reveals during the interview that he has had the fervent desire to work in investment banking ever since he graduated from high school and decided to pursue commerce going forward.

But things hardly ever go as planned, when he witnessed the amount of hard work his father put into growing his business, he felt it was about time to change course and invest his time in the company instead of pursuing something else. For the last four years, he has been working alongside his dad in the company. Preyash joined Saraogi Shellac and Aromatics as an intern to learn about the business’s internal operations. Over time, he worked his way up to the position of Director, managing a staff of 25 people.

Moreover, it was with Preyash’s intervention that the company has grown a lot since the pandemic, their market share has gone from 20% to 32%.

More about the parent company

The parent company, Saraogi Shellac Overseas Corp was established in 1991 by Dinesh Saraogi and he worked his way up to engrave the company’s name in the Lac industry today. That was the same time around which they ventured into trading Seedlac and MM lemon to the USA. In 1995, they formed a partnership with a Balarampur manufacturing facility to produce Seedlac, Machine Made TN, and Orange Shellac. For our Sticklac requirements, in 2002, they launched Sticklac Buying in Indonesia. They saw a rise in market share as a result of this. In 2003, they started providing Dewaxed Shellac Flakes to fruit coaters in Valencia, Spain, and Catania (Italy). To obtain Sticklac, we established their own buying house in Lampang, Thailand, in 2007. They could readily obtain Indian Sticklac from Indonesia or Thailand whenever there was a scarcity.

From 2009 to 2013, the company was able to position itself as the most well-known Indian Shellac company on the international market and also won five consecutive Export Excellence Awards. By beginning to produce “AMBRETTOLIDE” under Saraogi Shellac And Aromatics, they diversified and forward-integrated themselves. 2014 marked a significant year for the group because they started manufacturing “Ambrettolide.” 2017 saw the establishment of an internal laboratory outfitted with the newest technology to correctly meet the testing and quality needs of all of their clients worldwide. Since 2021 they became the leading exporter of Lac and Shellac products.

The company specializes in Lac and Shellac products. Some of the products they offer are:

Preyash’s venture, however, operates under the parent company and specializes in the Ambrettolide used in perfumes. He explains that one of the essential ingredients of fragrance is Ambrettolide, a scarlet resinous insect secretion.

Saraogi Shellac has entered a market niche that has been served by Lac and Shellac-based products since ancient times. Previously, Indian Shellac producers exported Seedlac and then Aleuritic Acid powder to the Aromas, Flavour & Fragrance Industry for the production of Ambrettolide.

“Within four and five years we have established ourselves so well in the market that we are setting up a replica unit soon.”

Preyash continues by noting that their current production capacity for Ambrettolide per year will be doubled annually over the next two months, putting them in a stronger position to meet the market’s demand.

In the near future, he wants to create an amber family in order to cater to any need for a product that relates to the Amber musk group in the F&F industry. Preyash is also passionate about mixology and he looks forward to setting up a business for that alongside his current endeavour.

Preyash speaks on the significance of having a mentor in his concluding remarks. He also expresses his gratitude to his father, who has taught him a lot and whose example he aspires to emulate. Lastly, Preyash implores emerging entrepreneurs to invest time and money in practical experiences and learning rather than theoretical knowledge.