Entrepreneurs Today
Home40Under40Prateek Tosniwal is Educating the Current Generation on the Virtues of Smart...
40Under40 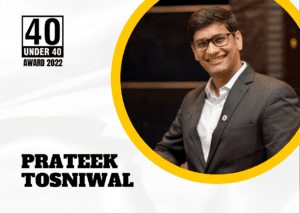 How to curate multiple streams of income?

Entering the professional world in the heat of continued recession times, Prateek Tosniwal knew that the era of a single well paying job to sustain a standard lifestyle while saving up for retirement, was over.

He was in a respectable and high salaried profession. A registered Chartered Accountant, his was one of the most sought after jobs on earth, with a continuous demand, and revenue flow. But the economic structure of the world had undergone a sea change, and he knew he needed to evolve with it in order to create a sustainable source of income.

Thus he began looking into investment opportunities. In that pursuit he was brought face to face with the confusion of generation of educated young professionals, fumbling with the dissatisfactory returns on their work.

By then Prateek had surveyed the market well, and had developed a keen understanding of its machinations. He was in the premiere position to advise people on how best to build their investment portfolio, and to that effect, launched his business venture and brand.

Prateek wanted his own outlook to be the unique selling point of the brand. He has thus been personally involved with all his clients in their investment aspirations, whether they be individuals navigating personal finance or start-ups trying to raise money for their projects.

Like most good investment advisors, his approach to the subject is holistic. In terms of start-ups, it involves initial handholding, evaluation and investment, as well as project finance. In terms of individual investment plans, Prateek’s focus is on integrity and ethics over short term gains.

Although currently an incredibly sought after financial advisor, the beginning of his professional journey was rocky. Clients were slow to realise his diligence, and business was slow. However, he was blessed with a supportive family who continued to believe in him even in distressing times. They constantly reminded him that nothing could be gainfully earned without a balanced investment of risk. This, he regards as the biggest lesson learnt in his 20s.

Prateek Tosniwal is now a renowned personality in the world of financial and investment advice. His work and achievements have been covered by multiple media outlets like Your Story, Business World, Business Standard, Times of India, Economic Times etc. He has also been given prestigious awards like 40 under 40 Times of India Award, Indian Icon Award, and Indian Entrepreneur Award.

At a professional level he has been working as an advisor with IVY Growth Associates, a micro venture capital and angel investment community with over 300 investors in its loop. Through it, he has been able to impact up and coming start-ups in sectors like edtech, fintech, SAAS, agritech etc.

His personal philosophy, as reiterated in multiple interviews and press releases, is to make money while asleep in order to avoid working till death. And to literally put his money where his mouth is, he has invested in more than 30 start ups, and partnered with successful venture capital firms like Incubator, Accelerator, Angel Network, Micro Funds, AIF Fund, Investment Banking Firm.

While he aims to increase his sphere of impact to 500+ companies over the next decade, he is not only focused on finances and work. Like most intelligent professionals, he knows the value of leisure, and invests in travelling extensively, having already visited 8 countries. He is also an adventure sports enthusiast, being an accomplished scuba and sky diver.

To him, financial independence is a gateway to happy living, enriched by the presence of friends and family. While he is aiming to create sustainable financial plans as a professional, personally he aims to build sustainable relationships as the basis of his life.