Entrepreneurs Today
Home30Under30 2023Jatin Khanna Brings Solution to the Unmet Demands in the Sports and...
30Under30 2023 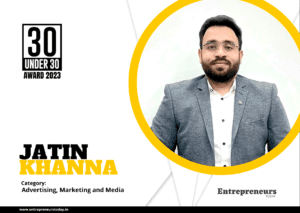 Jatin Khanna, who presently serves as the director of Fit Tech India Sports and Fitness Equipment Pvt Ltd and is based in New Delhi, completed his education at Ramjas School in 2013, graduating with a B.com from Delhi University.

Jatin, who is currently 27 years old, started his career in the business sector in 2014 while he was still pursuing graduation.

Jatin started his own company in the Name of Fit World where he was the proprietor of the firm. With an approximate turnover of 55cr in FY21–22, he handled the business alone from 2015 to 2022.

As of this year, Jatin has founded Fit Tech India Sports and Fitness Equipment Pvt Ltd alongside Sumeet Ubhrani (Director), who is 37 years old. They anticipate having a turnover of roughly 75cr this year.

He gives credit to his father Parvesh Khanna, who has always been his rock and supported him in his accomplishments. Especially his family, who helped him by encouraging him and keeping him motivated to pursue his passion. He also expresses gratitude to Sumeet Ubhrani, Director of Fit Tech India, for believing in him and working with him to realise their shared vision.

What was Jatin Khanna’s state of mind before he set out on his entrepreneurial journey?

Jatin says, “for me to start a business there were 2 things that mattered the most, one was the Goal and the other one was the Agenda to do business in India.”

He goes on to further explain that concerning the agenda, he calculated how many people he would be able to support with a small business the day he started thinking about starting one. For instance, if he currently employs 10 people and decides to launch a manufacturing unit, he anticipates that 40 to 60 people, either directly or indirectly, will be employed by this small business. This will contribute to income generation.

As per the goal, he says his uncle operated a fitness equipment import company in 2014. They were importing almost everything from China and Taiwan. In a conversation with him, he learned that there is no such large company operating in this sector in India. He aimed to produce these items only in India. He wished to promote a way of life in which maintaining physical fitness or good health is thought to be the norm.

He was aiming for the home fitness market and did his research to learn that the Indian industry is quite small and that starting a manufacturing business requires a significant upfront investment, technical strength, and superior salesmanship. However, he had the impression that the segment would gradually expand to its peak between 2035 and 2040. He believed that Covid was responsible for changing people’s perceptions and convincing them that fitness was also important.

Some of their other achievements include:

Things, however, did not always look so bright as Jatin chose a sector where many individuals shy away from conducting business. It is not easy to haggle over prices with merchants, where their products aren’t ubiquitous and widely available. They had to battle side by side with importers who got materials from China.

When asked what he had learned in his 20s, Jatin responded that the best thing about being in your 20s is that you have plenty of opportunities to learn new things and can easily form new habits.

In his twenties, Jatin had discovered that you may occasionally take advantage of the fact that people don’t always take you seriously so you can play the Underdog in those situations. He goes on to say that while he had many rivals and people who weren’t there to support him throughout his early years, he was fortunate enough to have the support of his family. He also expresses gratitude to God for making it all happen, and for having a role in shaping who he is today.

Some of his other lessons from the twenties are:

1)The Road to success is not straight.

2) Dreams do come true. And hard work, grit, and determination do pay off.

3) You don’t need a degree to do marketing.

5) Age is just a number. Anybody at any time can start the business.

They aspire to take the company to the next level over the subsequent seven years. Their future plans revolve around: