Entrepreneurs Today
Home40Under40Dr. Khushi Panjwani, The Leading Innovator In The Field Of Fin-Tech
40Under40

Dr. Khushi Panjwani, The Leading Innovator In The Field Of Fin-Tech 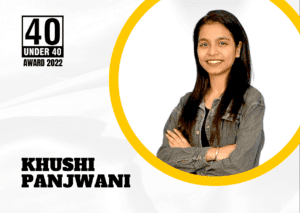 Dr. Khushi Panjwani is India’s top-ranked young innovator and entrepreneur in Fin-tech. She is also a best-selling author, motivational speaker, investor, and social entrepreneur, among other things. Furthermore, DigiXlance and Fin-O-Serv were both founded by Khushi.

DigiXlance is a finance social media, and lead generation agency that helps finance creators, finance people, and many fin-tech businesses to establish their personal brand and grow socially. Fin-O-Serv is a fin-tech-based company, which deals in wealth, and risk management, portfolio management, 1:1 mentorship programs, and goal advisory services.

It is the lack of financial literacy and social presence that propelled her to begin her venture of DigiXlance. It is a digital and influencer marketing agency where marketers concentrate on using influencers to promote their products and influencers don’t have to put in as much effort to find brands/businesses, creating a win-win situation for all parties involved. They want to promote businesses through influencers and intent while also providing influencers with their brands and enterprises. Their long-term objectives include providing simple digital assistance to brands.

Khushi creates fascinating content about money and the stock market that is geared toward young people. Because she exerts so much effort and considerately assesses her audience, her content sticks out as being exceptional.

Values and lessons learned in the 20s

Khushi has learned in her 20s to never fall prey to self-doubt and that there is no such thing as the right moment to start something, it is you who has to make your time right. However, in the initial phase of her business, she felt the heat in generating leads. But since she already had experience in lead generation, her state of mind when she set off on her venture was that things eventually get better once you start.

With over 199+ accolades in the field of finance and entrepreneurship, Khushi’s endeavors have been acknowledged in numerous fields, and she has received awards in several categories, including the “Humanitarian Excellence Award,” “Best Entrepreneur of the Year Award,” “Most Deserving Award,” Star Book of World Records,” “Vajra World Record,” “Best Achiever of the Year,” “Best Content Creator,” “Independent Icon Award,” and “U.K. Books of Record.”

Khushi thinks it’s typical for any startup or firm to inevitably run across difficulties in their initial stages, but those difficulties will also help you flourish. Getting clients, however, was her biggest obstacle, but her “Never Give Up” attitude enabled her to overcome it and build a clientele and generate revenue. Only ten of the thousands of clients she used to contact would reply. In light of her perseverance in defying the odds, no matter in which room she stands she is a force to be reckoned with.

Panjwani hails from a blended family, and her father is a successful businessman and politician. Khushi pursued her ambitions and aimed to emulate her father’s achievements in life. She is an Indian entrepreneur who is self-sufficient, self-made, and compassionate. For Indian youth, Dr. Khushi Panjwani is undoubtedly an inspiration. Even at the young age of 20, she is a successful businesswoman, earning in the lakhs. She is a multitasker who keeps things moving along while keeping her dreams close to her.

In the future, she wants to exhibit the banking and stock market industries and wants to fundamentally change the stock market, trading, and financial worlds in a few years. Seven years down the lane, Khushi still envisions herself working hard, building her firm nationally and abroad, living her life to the fullest, and crossing half of her bucket list off.