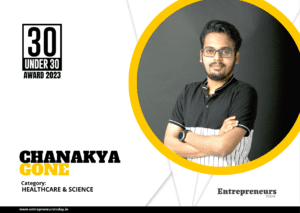 Founded in 2018, Makers Hive is a Hyderabad-based startup. They have created the first completely functional bionic hand in India, KalArm®, for below-elbow amputations. Makers Hive hopes to democratize the bionics sector with KalArm®, one of the most economical bionic hands in the world. The market debut of KalArm was scheduled for the final month of 2022.

Their Bionic hand, which is assisted by the mobile software KalAssist®, has six custom grips and 18 predefined grips. The hand is capable of lifting up to 8 kg. The KalAssist® Mobile Application has features of Device Monitoring, and one can also update Device Firmware from the app.

This hand would enhance the lifestyle of Amputees and help them lead an easier life, which was previously difficult.

About the CTO of Makers Hive

Chanakya is 27 years old engineer and technology geek. After serving as the Chief Electronics Engineer for a year, he was made the CTO of Makers Hive in 2019. He has worked to establish the company’s technological roadmap, evaluate technical viability, ensure efficient, secure, and profitable technology usage, build quality assurance and data protection processes, create timelines for the development and deployment of technological services, and ensure that all products adhere to regulatory standards. Chanakya has also managed technology budgets and time frames, performed design and code reviews, infrastructure reviews, and managed technology projects.

Regarding their project, Chanakya explains that it was a gradual process to understand the medical terminology, muscle physiology, and the needs of the many kinds of amputations. He says that they examined the hand’s electronics, mechanics, and cosmetics. The Bionic Hand weighs around 450 gms.

The project has received accolades from the Department of Science and Technology- Govt. of India. The Honourable Vice President of India, the British High Commission, the World Health Organization, etc.

The bionic hand underwent testing for certifications before entering the healthcare market. The company wants to significantly lower the price of these bionic limbs from what they are now. In India, sophisticated bionic arms purchased from outside range in price from 25 lakhs to 35 lakhs, they hope to sell the bionic arm for roughly 4.5-5 lakhs.

The team insists that this is just the beginning and that their plans for the future entail much more. In the near future, they have plans to develop KalArm® Mini for children as well as KalArm® Above Elbow. There are also in talks about advancing the field of bionics and creating a wheelchair that is controlled by the brain. A few years down the line, they also want to start working on projects of building Exoskeletons that can help soldiers on the border share the heavyweight, as well as gloves that can stabilise the hand movements of Parkinson’s disease patients. The plans, however, are still in their pilot stage but they look forward to receiving both public and private support in the future.