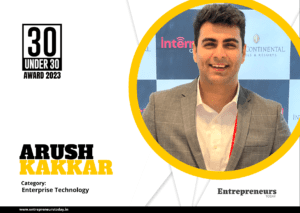 After graduating from college in 2016, Arush began his entrepreneurial journey by founding the first venture that he sold off within two years. Agrex.ai is his second venture. Apart from being a serial entrepreneur, he is an author with 2 published books and a computer vision and deep learning researcher. He has worked on technologies like Self-Driving Cars, Autonomous Navigating Drones, Solar Powered vehicles, and satellite images.

In a conversation with Entrepreneurs Today, Arush shares that he came up with the idea of founding the company while he was working with a client. He had a revelation that in the e-commerce space, companies have a lot of data about their customers but not so much in physical retail. So, the first product Arush worked on was to connect data about customers with customer behaviour for physical retail stores by using deep learning and computer vis

From using the product for retail and customer analysis, they soon moved to other spaces like security, logistics, banking, government, military and paramilitary. Currently, they have more than 10,000 use cases across different industries for clients to improve their operations, security, revenue and to decrease costs without compromise on service and quality.

The video analytics offerings that they have can be used to improve information about what customers are doing and how they are behaving. They can be used to aid in the operations of physical stores as well in terms of logistics operations. Moreover, they are also helpful in improving the security of an establishment like banks, ATMs and across borders.

What are some of Arush’s achievements till now?

One of Arush’s accomplishments includes getting two of his books published. He has also made it on the list of 25 under 25 people for Science and Tech in India. He has also given a TEDx talk on how Artificial Intelligence is set to change the world. He is also recently named as 30 under 30 in Entrepreneur Magazine.

Arush also takes pride in the fact that the majority of the clients they have worked with or approached have commended them by stating that their design is unquestionably the best they have ever seen. Currently, they are working with multiple clients across the world, mostly from Europe.

What are the challenges he faced?

Arush reveals that in terms of growth, the journey has been quite good for the last three years. He further adds that they started with just one client and their roaster today has over 60 clients.

In terms of the challenges, he shares that there were times when they had to manage a lot of work and deadlines with a smaller workforce. However, now that they have a relatively bigger team, sometimes it gets a little taxing to manage the teams and ensure they are all in line with their responsibilities and are aligned with the goals and vision of the company. However, with time they have been able to overcome the challenge.

As a natural problem solver, Arush claims that his entire entrepreneurial path has been inspiring. He always looks forward to going to work. The fact that some of their customers frequently approach them with accounts of how their product saved them from threats and potential losses is another factor that inspires him.

What are some short and long-term goals for the company?

When asked about the plans for the company, Arush says that in terms of short-term goals, they want to become the leading video analytic company in all domains. Their next aim is to have a leading presence all over Asia, followed by Europe and the US.

In the next five years, they want to grow their infrastructure, diversify into different businesses, work with the government and the military, and further the “Make in India” initiative. They are already taking baby steps towards realizing their goals by taking on military contracts.

What are some of the important lessons he learned in his 20s?

The overarching message he wants to share is that one has to take personal responsibility for a lot of work that one does. There will be a lot of distractions, but it’s important to set your priorities as to what it is that you want to do and achieve.

He also notes that it is important for one to align themselves to their actions to be who one wants to be, and only then you’ll one get closer to your goal. So, being consistent and persistent is the key.