Entrepreneurs Today
Home30Under30 2023With and for the youth: Rishab Shetty shares about his venture Viral...
30Under30 2023

With and for the youth: Rishab Shetty shares about his venture Viral Fission 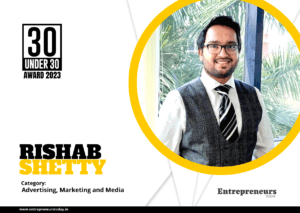 Through activations, youth ambassador programs, and online and offline experiences, Viral Fission is a platform that connects the most capable and enthusiastic youth with the brands they love in India.

They saw and linked several issues in a society like India, including the absence of conversations between brands and youth and the lack of job opportunities and career launch opportunities for youth. So, they came up with a solution that benefits all parties involved in this field and even add value by bringing them together in ways that are mutually beneficial and enable companies to test the influence of young and ultimately have faith in the future changemakers.

Rishab’s path as an entrepreneur has been exciting and fulfilling, from starting a business amid a pandemic to involving the nation’s gifted, opportunity-deprived kids.

The biggest youth community platform in Asia was co-founded by Rishab Shetty, who also serves as COO He instilled a sense of community first via his talent and enthusiasm for connecting with young people. He can spot potential in the next generation and give them the tools they need to succeed. He believes that a variety of experiences have equipped him with the skills necessary to gather real-time intelligence, gain access to vetted social listeners and up-and-coming creators, and develop campaigns and portfolios that empower young people to take control of their lives rather than have them dictated to them by external factors.

“My ability and passion to connect with young people have been one of Viral Fission’s most important foundations in building this pan-India network. In college, I volunteered for the Mumbai branch of PMI India and AIESEC India, which set the ball rolling. I was able to form a wide network of young working professionals.”

According to Rishab, the company wants to redefine brand salience measurements with and for youth. Viral Fission provides a community-based youth network that co-creates unrivalled brand experiences.

Rishab shares that since he had to quit a lucrative career to set out on this journey, and because every other employee at the headquarters had to do the same, there were a lot of conflicting emotions at first. However, he was enthusiastic because he believed in the idea behind Viral Fission and could see the almost endless possibilities to which it could lead. He says he considers himself extremely fortunate to have his brother, Shreyas Hegde (Co-Founder), by his side during this period.

Rishab further adds, “I and Shreyas make the best team possible because I represent the community and have marketing expertise and he has excellent financial and strategic skills.”

The most challenging and inspirational times throughout his journey coexist for Rishab. He says, “when starting a business, the first set of hires is the most important component because it sets the tone for the company. During the early days, we had close friends who believed in our vision and joined Viral Fission, but there was also concern about how to maintain personal and professional relationships at the same time, but those who can manage it, trust me, go a long way.”

Rishab is delighted to witness these people leading their teams and putting forth the endless effort to achieve the goal of Viral Fission. A further indication of the viability of the Viral Fission ambassador program is the growth of the community as he observes their ambassadors now working as full-time workers, either in their own office or on the client side.

Business growth and achievements till now

In fewer than ten years, Rishab is optimistic that Viral Fission will be well-known and have a significant global impact. After seven years, he wants to keep pursuing his passion for working with and around young people while writing the next chapters of community tech and youth throughout the world with Viral Fission.

Some lessons he learned in his twenties are that it is crucial to upskill and have the necessary knowledge within the domain of interest. He also adds that being aware of your strengths and having empathy will get you far.

Share
Facebook
Twitter
Pinterest
WhatsApp
Linkedin
Email
Telegram
Previous article
“Shoot for the stars”: A peek into the journey of Neha Dhingra breaking new grounds in the marketing empire.
Next article
Resham Kamboj Talks About Her Journey As A Tarot Reader