Entrepreneurs Today
HomeBreakingImpact of Covid 19 on the Indian Economy
BreakingBusinessMoney

Impact of Covid 19 on the Indian Economy 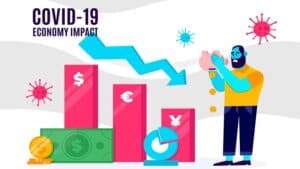 India was supposed to reach its demographic dividend on 2020, according to the 2001 census report. That dividend could have only been cashed through increased job creation. India was on the verge of economic rehabilitation, at least based on GDP growth over the 2019-20 fiscal year. However, the onset of the Covid-19 pandemic put a halt to the statistically visible development of the country. The impact of Covid 19 on the Indian economy has been severe and debilitating. The overall rate of fiscal contraction over the 2020-21 year is close to 7.3%, which was greater than the world average. This means that India’s economic downturn has managed to singlehandedly affect the global economic graph negatively.

Different industries in the country has seen a varying level of impact. The separate government-mandated lockdowns parallel to the different outbreaks of Covid 19 infections has impacted the country’s economy differently.

The first phase of lockdown in 2020 was implemented suddenly, and confused the population of the country. The severity of the Government’s crackdown on law breakers, became controversial, as roadside vendors, migrant labourers, and public transport workers were the worst affected. The suspension of railway and bus services meant that workers living in areas away from their homes were stuck. Although the Government issued orders to landlords to allow tenants to stay without rent, a reverse exodus took place from metropolises like Delhi and Mumbai to their home towns.

The health sector was also highly affected with an increasing demand for workers. Hospitals, especially in the public sector, were overrun with patients, and had to limit their functioning in other kinds of treatments.

As to other industries, Hospitality, Tourism, and Automobile sectors faced a big decline over the course of the first wave, as despite continuous inputs of buffer money into the economy from the centre and state governments, as well as developmental banks, the engagement with the real economy was minimal.

India’s fiscal deficit for the 2020-21 financial year soared past its meagre projection 3.5% to 9.5%, and the unemployment rate capped off at 20.8% in the first quarter of the year, before dropping to 10.3% in the third quarter.

The second wave of Covid 19 hit India in early 2021, and another nationwide lockdown was announced soon enough. The delta variant of the virus came about with a different set of symptoms. This was also the time when vaccines were being deployed with a focus on the aged and the immune-compromised people. However, with industries and transportation suffering with the impact of the lockdowns, the country faced a massive shortage of vaccine and medical personnel again. A huge number of working doctors and nurses fell ill, and were taken out of the working economy. Metropolises like Delhi NCR and Kolkata also faced a dire shortage of oxygen supply, and hospital space was barely available for suffering individuals.

Educational institutions remained closed for the majority of the year, with most of nationalised examinations, including the boards and higher secondary examinations changing formats to MCQs, which saw much criticism from different sectors of the population. The youth unemployment rate rose exponentially, as most of them were engaged in the informal sector, and lost their income sources with the constant fluctuations in the economy. In the third quarter of the financial year, India’s unemployment rate capped off at 9.33% in the urban sector, and the rural sector at 7.28 percent.

The impact on industries like Hospitality, Tourism, and Automobile was curious. Although expenses rose in the tourism sector, there was still a significant rise in travels among the middle class population of the country. The festival celebrations being handled with pomp meant that the events acted as both super spreaders and economic boosters, causing a spike in both the graph of the infected as well as GDP points.

The Automobile industry saw a similarly strange occurrence in its functions. While Ford decided to withdraw production from India, a huge rise happened in the electronic automobile industry. Companies like Raftar Motors raised their expenditure significantly, pledging to open multiple factory outlets throughout the nation. The production and consumption of electric motors increased, and training for maintenance and construction also rose in tandem.

At the end of 2021 the rate of vaccination in India is 44% of the population completely vaccinated, as opposed to 62% of population with partial vaccination.

With the beginning of the new year, the Omicron variant of the virus has begun its reign. The first sets of lockdown have been started across the country, as educational institutions, which had been tentatively opened are once again being closed with the fear of infections. To top it off, despite its symptoms being mild, Omicron is a highly contagious variant.

So the only thing we can do at the present moment is hold on to our hopes for a better outcome in the annual future.

Economically India has been recovering. However the growth, as given in the last few sections, has been markedly slow. Despite boosters provided by the government and deveopmental banks intermittently, the GDP has been struggling to keep its pace of increase, and the fiscal deficit has been constantly exceeding the projected limits.

In this situation the only way to work things out would be a focus on community based development. Nationwide directives would need to be bypassed for district or even block based developmental initiatives, where screening for infections would be easier. This would also allow increase in employment, as the government would need workers to carry out the screening surveys and management of newly defined structures of economy.

This ground up restructuring of the economic environment of the country would not be easy, and would require significant planning. However it might become necessary as despite the improvements in the economic sector, we are still straggling behind the pre pandemic statistics, which were themself far shorter than the aims we had set for ourselves.

So in a post pandemic world, relying on outdated methods to bring India, and the world, out of the debilitating recession it is going through would require some serious out of the box thinking. Here’s hoping that we are up to the challenge.

CARS, WATCHES AND A LOT OF EQUITY – ALL ABOUT THE YOUNG ENTREPRENEUR FARAAZ IRFAN CHAPRA