Entrepreneurs Today
Home30Under30 2023Duvera Makes Strides in the Water Filtration Industry with Sustainability at its...
30Under30 2023 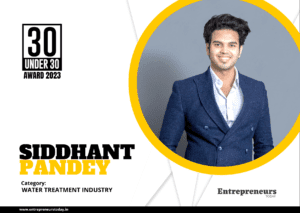 Hailing from Delhi, Siddhant Pandey is a 23-year-old entrepreneur and the Founder & CEO of Duvera.

Since his formative years, Siddhant knew he had it in himself to convince and lead people. So, after completing his 10+2 with biology, he did not want to succumb to societal expectations and pursue a career in medicine. Instead, he wanted to focus more on his strengths which led him to pursue BBA LLB from DME Law School – Indraprastha University soon after completing his high school.

In a conversation with Entrepreneurs Today, Siddhant reveals that his zeal to make his own money started when he was still in school, where he used to sell Street style clothing, then moved on to personalised paintings. But soon after, he saw there was no room to expand or scale the idea.

Thus, when he was in college, Siddhant began looking for opportunities that are more profitable and scalable. While talking about how he came up with the idea of venturing forth into the water filtration market, he explains that his father used to work in the same industry and he knew a great deal about the inner operations and the market. Thus, it only made sense to him to tap into the market.

Siddhant had the idea to establish this business so they could serve the entire market in the water filtration industry. His goal was that people should not have to look in different places to build just one machine. To address this issue, he built Duvera with the idea of building a one-stop solution that would provide people with everything from individual machine parts to complete machines.

More about the company

Today, Duvera is the leading provider of industrial water filtration that is efficiently transforming the industry. The company has been rising the market’s graphs against the competition since its launch in the year 2019.

Derived from a Czech word, Duvera means trust, and with that, as their core value, they specialise in three levels of service. The services offered are:

One of Siddhant’s personal accomplishments is that he is the youngest and one of the leading players in the domain. His other achievement is that with just an initial investment of ₹50,000, the company has reached a market value of ₹1 Billion. Since the founding of the company three years ago, they have not only reached the Indian space but also expanded in the International market. Currently, they are also working with Saudi Aramco.

He further adds, “The volume which we are generating is huge as we are taking big chunks of the components trading business in India.”

Siddhant reveals that the journey was not a cakewalk as they did not have any financial backing. As a result, they couldn’t afford to take any uncalculated risks. Throughout his journey, Siddhant has taken numerous risks without paying any heed to the judgments of others. He has also encountered unwarranted advice and discouragement, despite which he has kept his head held high and was able to create an impact. He also acknowledges the fact that it was his parents’ support that kept him going.

One of the major lessons Siddhant learned in his twenties is that till the time you keep imagining and analysing about a hundred things, you’ll only be trapped in your own cage of mere thoughts. He firmly follows the mantra of “Over analysis leads to Paralysis”. His belief in just starting to work on whatever you have in hand and dumping all the complicated hypothetical questions of the future course has propelled him to where he is and where he is going to be. He also holds the notion that if you want to achieve something and work towards it, the universe will manifest it for you.

In terms of the company, he believes that he has just scratched the surface yet. He is looking forward to going public in the next five to seven years. Ten years down the line, they anticipate for the company to have a valuation of 10 Billion.

Share
Facebook
Twitter
Pinterest
WhatsApp
Linkedin
Email
Telegram
Previous article
Ankita Parashar & the Enterprise India Fellowship are Preparing a New Generation of Entrepreneurial Professionals for the Industry By Facilitating Consulting Projects with MSMEs as a Vehicle of Learning for Youth
Next article
How to prepare your startup for recession 2023?