Bullspree: Making a Game of the Investment Process 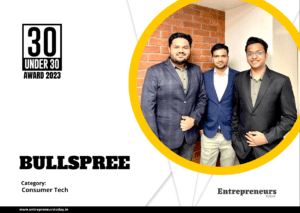 Bullspree sprang from the mind of three enterprising individuals, all of whom had an active interest in the world of stocks and trading. But the founders, Dharmil Bavishi, Harsh Dhanawat, and Divyansh Mathur wanted to approach it from a didactic perspective. It was an attempt to educate and invite new retail investors into the market. And their plan was to do it through a gamification of the investment process.

The story of Dharmil, Harsh and Divyansh is one of adult friendship and a shared interest in the same topic. While they had all been interested in the market, they had their separate professional achievements before they decided to join forces for the Bullspree app.

Dharmil and Harsh had been roommates in Mumbai, and had been gestating on the idea for a while, when the former was introduced to Divyansh through the Jagriti Yatra, a nationwide train journey involving five hundred enterprising individuals, chosen from a pool of over fifty thousand applicants. Divyansh, through his higher education in IIT Delhi, had become heavily involved in socially relevant entrepreneurial ventures, and had worked on products involving smart homes, green energy, menstrual hygiene, etc. He quickly agreed to join the initiative, working on the project’s vision and mission statement, and eventually becoming a co founder of the end product.

Dharmil had extensive managerial experience, having earned an MBA from Masters Union and worked in Infibeam where his efficiency got him promoted to the CEO’s office within months of his joining. But he chose to divert into the fintech sector, owing to its rising popularity. He was also personally interested in executing a more effective investment education in the country, as his family had once been the victim of a bad stock investment, losing over 25 lakh rupees in the blink of an eye. Divyansh had suffered a similar fate during his college years, when he had lost 1 lakh rupees over a single trading session in the stock market. Thus the two of them knew that they not only had a viable market to work in, but also a prominent service to provide.

Being a chartered accountant by profession, with over six years of experience in the field, Harsh quickly gauged the viability of the product. His experience as a number cruncher made Harsh a valuable asset to the team as an overseer of the systems and product. Dharmil focused on growth, marketing, and brand building, whereas Divyansh put his efforts into utilizing his prior connections to raise funds and has since brought in the big names to Bullspree’s cap table. Their joint labour found fruition in a Minimum Viable Product launched in 2021.

The share of retail investors in the market is exceptionally low. Though this has been somewhat remedied following the pandemic, which forced a resurgence in investments to tide over the inactivity of the practical economy, it is still a negligible rise overall.

This rise has also had its negative impacts through the indiscriminate investment patterns inspired by YouTubers, whose extravagant claims of market gain have created an illusion of easy profit around the stock market.

The founders of Bullspree wanted to counter these patterns with an involved didacticism that could be a practical learning experience for aspiring investors. Their solution was to gamify the investment experience allowing the users to learn the intricacies of the stock market through a fun filled experience.

The MVP launched in 2021 proved the viability of such a product, as the expected player base of 15000 users was far exceeded by the massive response of over 60000 users queuing up to test the proverbial waters of the share market experience.

So how does the gamification work?

The founders wanted to help develop the psychological mindset that is necessary while dealing with the volatility of the stock market, while also instilling an understanding of the movements of the market in the users.

The primary game on Bullspree involves the creation of a hypothetical portfolio. The users are asked to create their own basket of stocks, according to their individual assumptions about the movement of their prices. The stocks mimic the actual movement of the market, and the users with the best portfolios are rewarded.

While the aforementioned one is the most involved game on the app, it is not the only one. A game called PredictO asked the users to make predictions on the movement of certain stocks, providing trivia about the market along the way. Another one called Quizspree is a simple trivia game that helps users expand their knowledge base.

As is evident, the games are simple and accessible in nature, and have wide entertainment and utilitarian appeal. They have been successful in attracting a steady pool of users, with a constant month on month growth of about 25%.

The Bullspree app, though launched from an altruistic motive, is still a business, and the founders have chosen an interesting way to monetize it. The participation in the games is done through app specific coins which can be purchased by the users to buy stocks for the portfolio. Along with these in app purchases, there is also a platform fee that is charged from the users based on the total amount of transactions that happen from their account. Alongside funding the operation, this coin based participatory model acts as a controlled recreation of the real stakes involved in the actual stock market.

Moving into the future, the three founders have plans to introduce a subscription based service that would allow users to access advanced features on the app, as well as specialized analysis on improving their market performance. This is currently in the beta testing stage, along with multiple other plans of expansion.

The ambitious trio have a whole coterie of plans for the future of their application. Along with the subscription system, they are planning to introduce a leveling system that would rank users according to their performance, and help gauge their progress overtime. It would help drive engagement among players, while also encouraging them through the visible metric of growth.

Beyond the game, there are plans to increase Bullspree’s scope as an application through integration with other companies and stock brokers to provide end to end, integral, and fundamental analysis along with stock broking services, along with diversification into wealth management services. Basically, in the long run Bullspree is aiming to become a comprehensive financial platform with services ranging from pedagogy to trading.

As is quite evident by now, the story of Dharmil, Harsh and Divyansh has just begun, with a long way still to go. And their cumulative creativity and persistence makes one quite sure that they will traverse the path with consistent aplomb.