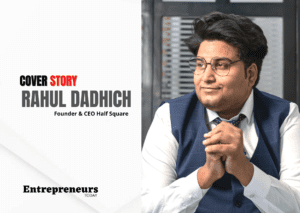 Cover Story: Rahul Vinodhkumar Dadhich We have moved pell-mell into the digital age, the transition somewhat swiftenedby the pandemic. But we cannot claim to have been blindsided by it, with cyberspace having slowly become a major part of our life through the expanse of the 21st century.

In business, this has opened up newer avenues of function. There are innovations coming up in the area of digital marketing and sales, services are moving online, and financial transactions are getting massively digitized. This movement from the use of computers for documentation and calculation processes, to communication and financial transactions is a sudden and enormous leap. From the individualized cyber security and threat of identity theft, now the biggest corporations are at risk of hacking. It is no wonder this is one of the fastest expanding services in the industry.

What Rahul Vinodhkumar Dadhich is attempting is to bring about another transitional moment in that sector, that would bolster security even further against interception threats.

In our interview, Rahul came across as a sure footed young fellow. It was with a similar confidence that he had chosen to pursue cyber security as a vocation.

From a young age, he had been fascinated by the world of banking and finance. He felt an urge to unearth the hidden eco system that lay underneath the labyrinthine system of deposits and vouchers. This world became linked to the digital world when news of a hacker attempting to breach HDFC bank’s security broke in 2018. Rahul had found his niche.

Following a graduation course in Chandigarh University, he enrolled in a course on Cyber Security in New York University. Although his plans for travelling to the States were dashed by government restrictions, he took full advantage of the unique course structure provided by the University. Following its completion, he gathered experience as an employee with Google and Oracle for a couple of years, before returning to his country, figuratively and literally.

Rahul’s entrepreneurial journey started with the unfortunately named Melanism Cyberlabs, co founded with a couple of his friends. They started providing custom security services to big corporations, and quickly acquired a significant customer base, but was drastically affected by the onset of the pandemic. His friends were forced to leave the company, and Rahul himself was left with a company named after a pigmentation disease.

But he was blessed with a loyal and skilled team of people who stuck around through the difficult times, even agreeing to work without salary for a few months. With their help, the company managed to tide over the turbulent period and emerged rechristened as Half Square.

Rahul knew that he had to do something unique in order to stand out in the sea of cyber security services that were flooding the market. While he was sure of his efficiency, he wanted to be peerless.

Following an initial few months functioning out of Surat, Gujarat, he moved site to Mumbai, and later Bangalore, where he was able to access better talent at a cheaper price point. With this refurbished team, he began expanding his company’s repertoire of skills, looking into machine learning and artificial intelligence to enable a better designed security infrastructure for his clients.

Through his work, Rahul had been deeply invested the process of encryption, and wanted to take its impact to the next level. All communication across social and financial tech is currently end to end encrypted, it is not beyond violation. His current service focus is on Vulnerabiity Assessment and Penetration Testing or VAPT, which essentially audits a virtual framework and diagnoses its weaknesses. Half Square is also working with Web 3 encryption to provide an added level of security via two factor authentication system. And while it bolsters the system, it is not foolproof by any means.

Thus, he has been trying to develop a radio frequency based transaction line, which would be unique to each communication, making it essentially invulnerable. He has enlisted the help of scientists from Harvard, NASA, and ISRO to explore the viability of this idea, and develop it further to a level of executive efficiency. Their prototype service has been presented at the South Summit, and has been lauded for its visionary potential.

Rahul is a firm believer in self reliance. His is a bootstrapped company which has found its success through dedication and love for the service it provides. His investment in the development of his field is quite apparent in the last section. But Rahul is also a conscientious business person with a critical approach to valuation.

Having studied business and different successful business people with keen interest, Rahul has tried to follow their methods of performance and expansion with dexterous diligence. But what he has truly taken to heart is the lesson to not load up on investment as a way to artificially balloon his company’s valuation, choosing instead focusing on revenue generation.

With a cumulative revenue of about 1500 cr rupees, and a projected turnover of 60-70 cr rupees by the end of this financial year, Half Square is a hugely profitable company. The small but efficient team has successfully serviced clients of varying importance and dispositions, ranging from Police Institutes of multiple states like Gujarat, Maharashtra, Delhi and Rajasthan, the PMO’s office to multiple MNCs and Fortune 500 companies across 27 countries.

Half Square’s success has invited multiple investors into the fold, but Rahul is holding out till the end of the financial year, to be able to divert the funds into his pending future projects.

What the Future Holds

Rahul Vinodhkumar Dadhich is a dynamic individual with big dreams. As Half Square finds increasing success in the industry, he has new services awaiting execution. Square Security is an auditing software focused on individual users, that will provide them with security score and cross platform protection, whereas Arrowpe is a fintech service that will make international transactions free of government markups. They will debut at the beginning of the next financial year, bolstered by the aforementioned investments.

If there is one thing to anticipate from Rahul and his repertoire of companies and services , it is a consistent commitment to innovate. As the year draws to a close, his infectious enthusiasm for developing unique tech makes us look forward to the future with hope and longing.