Shije Varghese, who currently farms mushrooms for a living, was simply looking for a pastime when she first stumbled upon the idea. 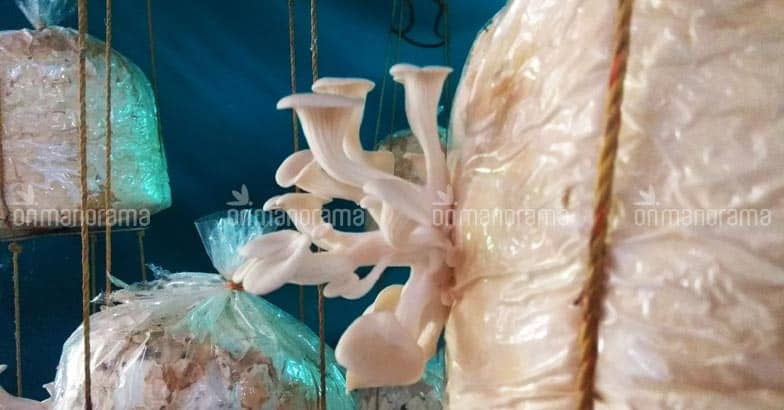 Her children had grown up and become independent, leaving her with a lot of free time. One day, she was invited to participate in a mushroom growing workshop by the agricultural officer, and despite some initial hesitance, she attended it.

She had been a fan of mushrooms as a food item since her childhood. But this was her first attempt at cultivating them. She began with a set of six beds, and grew through hundreds more in attempts at success. She visited different mushroom farms across Kerala, accompanied by her similarly enthusiastic husband, and finally matured into a seasoned mushroom farmer with her brand Coon Fresh (Coon/Koon being the Malayali word for mushroom.)

Although Kerala as a state has the humidity ideal for mushroom cultivation, controlling the conditions of growth to increase production is always encouraged. To that effect Shije Varghese has divined a technique herself, christened Bio-Hi Tech. To maintain a consistent humidity, her beds of mushrooms are suspended by a wet length of fibre cloth through which air from a fan is blown, as a huge hose sucks out the expanding warm air. Thus, cooling the huge room this production it takes place in.

The process of artificially induced mushroom production is odd, as the beds are hung from ceiling in plastic bags pilfered with twenty or so needle holes. Shije makes the beds with rubber-wood sawdust, which decomposes quickly when wet, and plants the mushroom seeds in them. Over a week or more, the fungus shifts in the bed, and sprouts through the holes on the plastic bag.

Shije has also devised a process of culturing mushroom spawn in her own home. Her scientific turn of mind, bolstered through a graduation course in chemistry and training as a laboratory technician, has helped her immensely in her role as a mushroom farmer.
Spawns are usually difficult to come by, especially in a place like Kerala, where mushroom is not endemic. To overcome this obstacle, Shije set up a lab at her home with tools to induce the controlled situations of spawn growth. They are cultivated from pieces of healthy mushroom tissue suspended in a plasmic medium, before being stored with half boiled rice.
Shije’s production has been so prolific that she is the face of mushroom farming and trade in the state of Kerala. She picked up her interest from a government workshop, and is now the host of many such training sessions.

On the business side of things, Shije Varghese has been similarly proactive in diversifying her products. She started selling powdered mushroom first, before introducing eccentric mushroom products like cakes and rasam. These have been surprisingly well received, sold under her brand Coon Fresh, and Shije keeps experimenting with mushroom preservation and cooking, introducing new variations regularly.

From the confines of her home, Shije Varghese has built quite an enterprise, with enthusiastic assistance from her husband, and Anto Joseph, her son who manages the digital marketing side of things. It provides her with an average monthly income of one lakh rupees.

Shije’s story as a businesswoman is inspiring, and symptomatic of the mushroom boom that is taking place in Kerala. She is one of the pioneers of mushroom cultivation in the state, who are exemplars of a new form of cultivation process within almost completely artificially induced conditions. Her efforts have been recognised through multiple state sponsored awards, and have exemplified an organised drive to increase domestic mushroom production, especially by homemakers.

All around, good time to be a mushroom lover.