Darshan Somaiya is India’s Top Millionaire Mentor, Mentoring his Pupils the Science of Achievement and the Art of Fulfilment

Cover Story | Darshan Somaiya owes much of his mindset and success to the surroundings in which he grew up. Taught in traditional knowledge by his family in general, and mother in particular, he leverages fulfilment as the central tenet of his ideology, and motivates his mentees into realizing their dreams.

Introduction to the Gita

Darshan was born in a family immersed in spiritual practices and beliefs. His mother meditated avidly, and was keen to educate her child in the belief system that she adhered to. So, when he was around ten years old, his mother introduced him to the Bhagavat Gita.

An observant woman, she had perceived Darshan’s keen intelligence and his desire to learn and grow, and she decided to foster it herself. She painstakingly explained the details of the book’s teachings, taking care to elucidate the context of the battle of Kurukshetra, the question from Arjun that had inspired the teachings of the text, and Krishna’s memorable and lengthy answer that was purported to hold the secrets of a mortal approach to life.

By the age of eighteen, Darshan had read the text over eight times, cover to cover, soaking up not just its words and teachings, but also the meta-textual comments about the friendship between Krishna and Arjun, and how the former groomed the latter into success.

Darshan found parallels between that relationship, and the one she shared with her mother, and grew deeply invested in the idea of mentorship. Recognizing this yearning to indulge in this relationship, Darshan’s mother decided to introduce him to Tony Robbinson next.

The Wider World of Mentorship

Darshan submerged himself in Tony Robbinson’s teachings for the next few years with the same diligence that he had shown for the Gita. In his pursuit of knowledge, he realised that the two discourses could be used to complement each other in terms of approaching reality as a malleable and actionable platform.

The idea to work on the unique and sacred relationship between the mentor and seeker, echoing the language of the Gita, had always been an interest of Darshan. With the passage of time, he realised that that world already existed in a certain respect, with inspirational speakers and professional mentors. 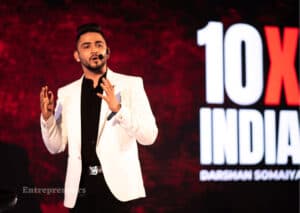 Darshan became involved in the mentorship industry at a young age. However, he was displeased with the scattered and disjointed approach to the art. he realised, it order to function to his optimum capacity, he needed to found his own business. Being his own master in the workspace was the only way he could realise his own potential, and help realise the potential of his trainees.

Over time he has founded three separate multi millionaire businesses, which have catapulted him into the forefront of the mentorship industry of India, building an extensive posse of fellow trainers who offered different specializations and preached his gospel of ambition and success.

The three institutes, namely Mission Positive World, Lead Monk Digital, and Guni Guru, all train and mentor business owners, entrepreneurs, leaders, as well as other coaches. They also provide comprehensive branding and business strategies to clients who require it.

So what exactly does Darshan Somaiya teach?

According to him, he teaches two things: the science of achievement, and the art of fulfilment. In lay terms, it is a way of visualising one’s dreams and ambitions, and approaching their realization practically. In his characteristically unique combination of western science, and eastern theology, Darshan attempts to transform his trainees’ professional acumen, inducting a mindset for success that helps manifest their goals. Many of his students have found incredible success in their particular fields building off the knowledge provided by Darshan in his sessions.

Being a certified Neuro-Linguistic Programming (NLP) coach, brand analyst, and behaviour therapist, he provides his trainees with the tools to navigate every aspect of running a business. This includes the development of new skills, learning political manoeuvres and developing unique solutions to commonly faced problems.

Read More: Darshan Somaiya – A remarkable force and influence on the youth!

Darshan’s holistic coaching has gotten him dubbed as India’s Tony Robbins. He has been featured in multiple news and media outlets, and has trained at least five hundred coaches across the country.

Although known as India’s leading millionaire mentor, counting more than fifty one millionaire’s and twenty one billionaire’s as his colleagues and trainees, Darshan likes to identify himself as a spiritual artist. To that effect, he has made his debut as the writer of Ultimate Millionaire Blueprint which has shot to the top of the Amazon bestseller list.

Beyond this vast skill-set, and operation of innumerable institutions, Darshan likes to set aside time for himself. He preaches a spiritually holistic livelihood, and follows his own principles diligently. He is at peace with the uncertainties and ambiguities of life that inevitably emerge, and knows to keep time apart to unwind from the drudgery of everyday.

So, he keeps 150 days of the year dedicated to work, while the remaining are divided between his family, and his travelling habits. He feels it is enough to realise his dream of creating an army of ten thousand coaches within the next seven years, who would not only be training people in their professional lives, but also help them connect spiritually with their private selves, leading to a comprehensive improvement of living.

After all, one should never get so busy making a living that they forget to make a life. And Darshan Somaiya likes to lead by example.