Mehul Patel, and his Journey to Becoming Mr Paanwala 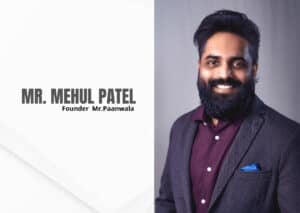 Mr Paanwala is in America and the connection is bad. The first call is at an inopportune moment, and I ask him to call back, because it’s a regular call, and I don’t have ISD. The second time one couldn’t hear the other, and even the third successful call dropped once in the middle of a conversation.

Here’s what we have from that effort.

Mr Paanwala is the alias of Mehul Patel, who grew up sharing his life between the city streets of Vadodara with his parents and sibling, and away with his grandparents. Nanaji and Nanima‘s place was often their summer vacation visit, and that is where Mehul Patel caught the paan bug.

Nanima was a connoisseur and proponent of paan, well versed in the traditional knowledge of herbs. She sourced items from very specific places, like her kattha from kanpur and supari from Kolkata. And she was a master paan maker, able to make one in two folds. The current industry standard is three to four folds.

So Mehul was learning from the best, priming for a successful apprenticeship. He absorbed his Nani’s knowledge and disposition towards the paan. He observed her folding style. He was eight or nine years of age.

In a world without her, Mehul sought out paan shops around Vadodara out of memory and habit. During his time in the city, he could be depended on to know of the best paan joints around.

Then he went to Australia, and fell into a scarcity he hadn’t anticipated.

Paan shops were all but absent. After completing his post graduate studies in Agricultural Science, he moved to USA around 2008-09 for his job, and the situation repeated itself.

He was very perplexed by this absence. Thankfully, on a trip to a grocery store, he spotted paan leaves on offer, and quickly bought some.

But he didn’t have any of the other ingredients needed to make paan. So he imported it from India, often through his friends and family. Then, in his place at the USA, he sat down to fold a paan for himself. It was difficult. But through multiple failures, he landed on an individual style. Inspired from the memory of Nanima folding them.

His paan became popular across the USA, slowly but deliberately. His friends and family commissioned him to make some for them, and recommended to others in their circle, who enjoyed it and became customers themselves.

The transition from a hobby to business was a strange and incomplete one for Mr Paanwala. He established the brand officially between 2015 and 16, assured by the popularity and demand. Since then he has found customers who were politicians and celebrities. They in turn, often discovered him at events in the Indian Consulate.

He had been a smart child with a streak of delinquency, which would often get him reprimanded in humiliating ways, by the school authority. It affected him, and he had a desire make his own mark on the world. As a response to everyone who said he would not amount to much.

He realised he wanted to make that journey through paan. 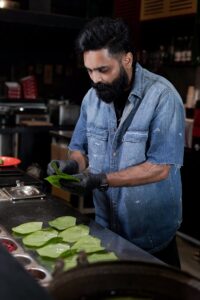 Paanwala’s success encouraged him into expanding the business into another city in the USA. And further down the years, around 2018, he started his first venture in India.

Here, for the first few days, the Paan Casa cafe saw a little resistance. The association of paan with tobacco initiated a lack of interest in the crowd. So the shop diversified its products into special paan based recipes like coffees, teas and milkshakes. There was also a focus on health, with the health based paan mocktail, and the weight loss paan, drawing on Nanima’s oral history, and further research work.

Concurrently, the brand also drove a campaign against the tobacco, with a focus on helping people quit. There have been about hundred people who have successfully made the journey.

This combination of diversification and education turned the tide, and the brand has expanded to 13 cities across India.

Mr Paanwala is an unique staple of the culinary industry. Mehul himself has dabbled significantly into the culinary sciences, which he says is an actual art, trying to come up with new flavour combinations. He trained through an online course, and heads an active research and development division that works on developing new recipes. 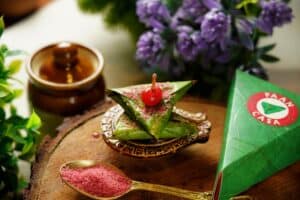 In the products, there is strange overlap of tradition and modernity. While some products are based on their health properties espoused in Ayurvedic thought, there are also intriguing things like a burger with paan chutney.

But Mr Paanwala doesn’t look down upon people who are not up to such experiments, and offers a regular variety of things as well.

Across the different outlets, the makers all follow the Nani inspired house style. Mr Paanwala himself has illustrated the process with a diagram, and often takes active part in the trainings

There is clearly a lot of passion behind this entire venture, that has found a strong set of followers.

But he hasn’t quit his IT company day job yet.

It might be a habitual thing, harkening back to his middle class upbringing, with one parent with a government job and another parent handling the household. There is a safety in the concept of a job.

More likely perhaps is that he is cautious. Running a business is never smooth sailing, and so it hasn’t been for him. During the pandemic years, the shops were shut down all over, and the employees needed to be paid. The job must have helped balance things out, then.

They slowly recovered with an online expansion, and joining the delivery race.

He confirms his plans to quit the job in the near future to focus full time on Mr Paanwala. The journey of the brand has been very personal for him, and his plans forward are ambitious.

His Nani was not a supporter of tobacco, and Mehul plans to preserve that attitude through the business she inspired. He has taken an active interest in education about tobacco related deaths, calling them social deaths. He is proud of having helped people quit the habit, and looks forward to make better and stronger efforts with each passing year. He has rejected about 15 CR of investment because the investors wanted to introduce tobacco.

On the business front, the plan is similar. His current company valuation is 35 CR, and his plan is expansion. There are outlets to be opened in more cities. And to counter the scarcity of paan he had faced during his tenure there, Mr Paanwala plans to revisit Australia soon. This time, with a few outlets of their own. The brand has already expanded to Canada in North America, and its plans for India is voluminous.

It’s a good time to be a paan fan, Mr Paanwala smiles. Perhaps folding himself a simple one. Three folds, and a triangle.

Maybe he will, one day.