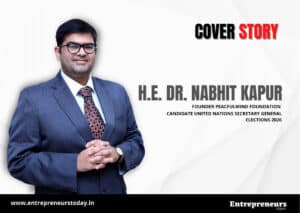 The phone call with His Excellency Dr Nabhit Kapur happens over him disembarking from a flight. The call is first received by his spokesperson, before being handed over to him.

All I know about him is that he is a psychologist and a diplomat, his own website designating him the colourful term psycho-praneur.
I naturally ask him about his interest in psychology, and how that began. His answers are curt and simple. He was introduced to the subject at school, while he was growing up in Delhi, and its intricacies interested him. That led to an academic pursuit of the subject till a doctorate.

So how did he end up a diplomat?

He laughs a little. Nothing really inspired him to be a diplomat. His work with the Peaceful Mind Foundation (PMF) slowly led into the journey that has currently made him a diplomat, and an international advocate for mental health.
Founded in 2016, Peaceful Mind started its life as a pedagogical organization offering training and certificate courses in therapy and counselling to willing students. Through the course of its early years, he realised a need for advocating mental health as a collectively relevant point of conversation. As he moved across the world as a flag bearer of his organization, he connected with people in different countries, with whom the discussion of mental health advocacy slowly grew at an individual level. 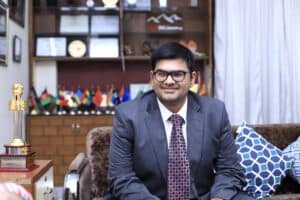 As time progressed the organization grew in stature and impact, and Dr Nabhit Kapur became a sought after figure in the diplomatic space, such that for the last few years he has acted as advisor to Presidents, Vice Presidents and other leaders of countries across Western Africa and the Middle East. Out of it, his work and time in Africa has been the most impactful, as he stresses on the need to advocate for Africa as a nodal point of distributing aid, rather than receiving it.

He is complimentary of the youth of Africa, across all the countries he has visited, as energetic and willing to grow. Only a country and peoples who have been so thoroughly exploited, through human and economic slavery, can serve as a political expanse for global healing.

Indeed, heal is the key term Nabhit Kapur focuses on, stating that it has to replace the negative connotations of ill. Advocating for a structural reconstruction of our approach to psychology, where cultural transaction at a collective level would create more diverse and enriched social spaces with better mental tools at our disposal.

Alongside his advisory work, he has continued to hold mental health conferences with leaders, specialists, and people from a variety of different age groups and backgrounds. Over the Covid year, the meetings and workshops were being held online, which is soon apt to change, as Peaceful Mind has organised their first physical event post-COVID. A partnered affair to involve different educational and advocacy organizations was coming up in the June and July of this year in both Dubai and London. His current work has thus been more of a diplomat than a psychologist.

If Psychology is understood, half of life is sorted.

He says.
It helps you understand yourself better, and judge social situations and personal cues better. And being identified as a psychologist gives him a bit of social edge.

He adds with a laughter.

But this fundamental take away from his discipline of choice is what he attributes to his becoming a mental health advocate, although he has personally never suffered any such issues. He realised that in addition to it being a discourse for the experts, it can also serve as a tool in our day to day lives, especially in such uncertain times.

Mental health discourse is considered elite in stature, and is often financially out of reach for many people. From the beginning Nabhit and his organization have been stumped by this reality. But he believes the way out of it is to make the discourse more accessible. With a rise in awareness about mental health issues, the knowledge about its intricacies will increase, and consequently, the necessary people will at least have the choice to approach a specialist. With the demand increasing, hopefully, the prices will fall. In order to begin that process, we need to initiate conversation in our personal spaces.